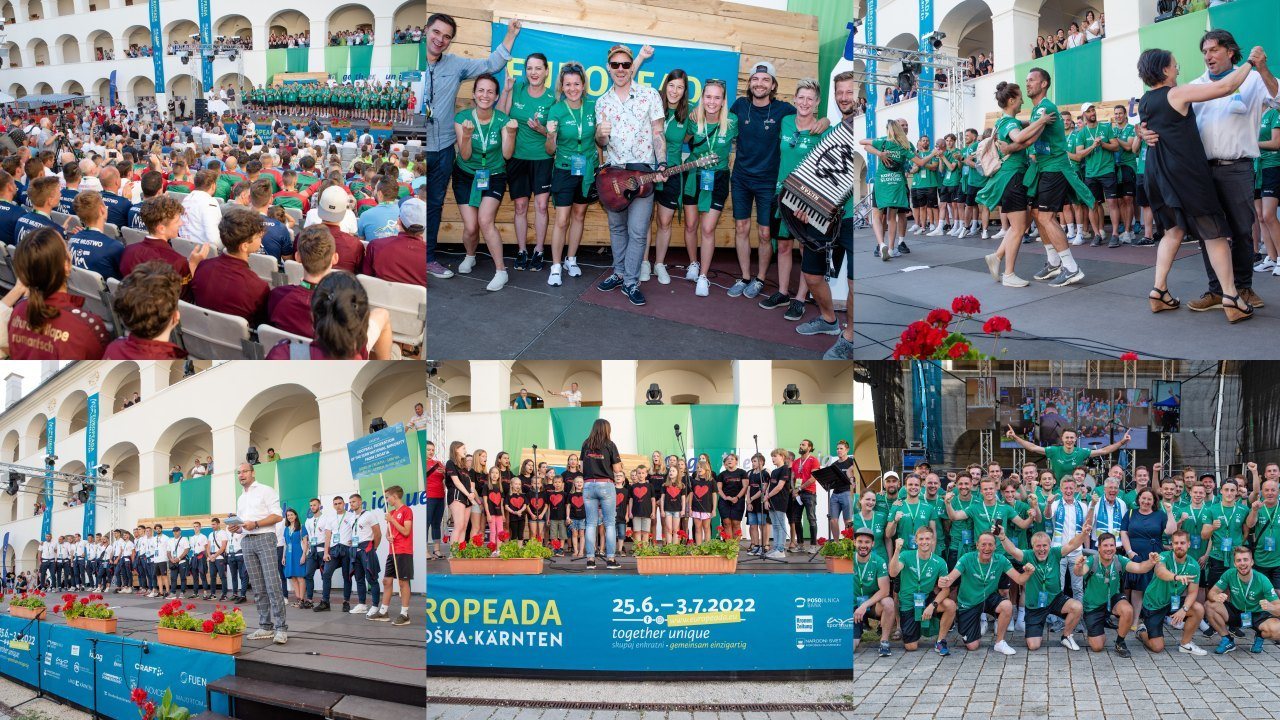 Impressive grand opening of the Europeada 2022

The 4th Europeada - European Football Championship for Autochthonous National Minorities - kicked off with an impressive opening ceremony in Dobrla vas on Saturday 25 June 2022, with 19 men’s and four women’s teams from 11 European countries taking part. Under the motto “together unique-gemeinsam einzigartig-skupaj enkratni”, it is organized by FUEN, Europe’s oldest and largest minority organization, in cooperation with local associations.

The opening ceremony took place in the courtyard of the Ebendorf abbey, which was filled long before the event even began, abuzz with all participating teams, the performing groups, and the audience, their different languages harmonizing through the venue. The opening ceremony started with Beethoven’s Ode to Joy, sung in three languages. The program was also trilingual - Slovenian, German, English - and was presented by the moderating trio of Marko Loibnegger, Marko Oraže, and Marko Londa.

They provided information that in 2017, at the Congress in Cluj-Napoca (Romania), FUEN had entrusted the Carinthian Slovenians with the organization of the Europeada in 2020, which had to be postponed until this year due to the corona. The Province of Carinthia strongly supported the Europeada throughout. Governor of Carinthia Peter Kaiser welcomed everyone in both regional languages and wished the participating teams every sporting success and a memorable time. He said that Europeada is a testament to the diversity of the Province, the path of community and peace being the best choice for Carinthia. He also announced that he would try to attend as many matches as possible. On behalf of the Republic of Slovenia, State Secretary Vesna Humar stressed the importance of language skills for growth and cultural empowerment and thanked the organizers for organizing this pan-European sports meeting for minorities.

The opening ceremony was co-organized by a local association SPD “Srce”. As their President Giti Neuwersch said, the association is used to holding large events. However, it is a great honor and a wonderful experience for the SPD “Srce/Heart” to participate in the opening of Europeada, “this grand event”. Three of its groups, the children’s group “Srčki/Hearts”, the youth group “Sweetheart” and the Mixed Choir “Srce/Heart”, as well as many volunteers, were involved in the opening preparations. It was also actively supported by the municipality of Dobrla vas. Mayor Wolfgang Stefitz described his joy at the opening of the Europeade: “For us, it’s like feeling the breath of the Olympic Games!”

To the sound of their national anthems, with flags in their hands, the teams took to the stage, four of them with both a men’s and a women’s team, starting with the South Tyrolean team “Südtirol”, the reigning Europeada champions. The emotional highlight of the opening ceremony was undoubtedly the arrival of Team Koroška Kärnten, led by their selector Marjan Velik. The combined choirs from Rož, Zila, and Podjuna, arranged in the arcades above the stage and sang the evergreen Ob reki Dravci by Milka Hartman, under the direction of Roman Verdel and musically accompanied by the trio Kristijan, Marjan and Tone. The audience enthusiastically embraced them. Some of the athletes on the stage even began to dance and SPD “Srce”’s President Giti Neuwersch , as well as Mayor Wolfgang Stefitz soon joined in. Europeada has reached the hearts of the people. It even has the support of Aleksander Čeferin, President of UEFA. As FUEN President Loránt Vincze put it: Europeada is more than a sporting event. It strengthens our identity, tolerance, and peace.